The Children- Pools of Blood

This week went better than last week.
The characters are still in the Well of Souls. We had ended last game with the characters having just entered a room. I had given a brief description then we called the night. The room consisted of two pools of blood that had to be traversed. The blood is detrimental to non-demons and helpful to demons. In addition there were two statues that produced damage on anything in the room, but not in a blood pool. Of course the object the characters needed was on the other end of the room. 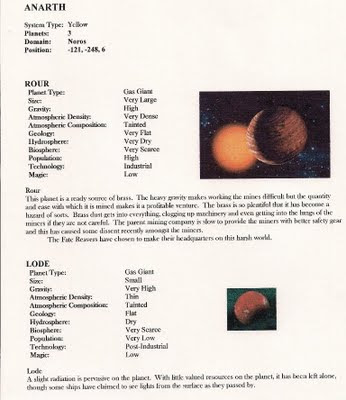 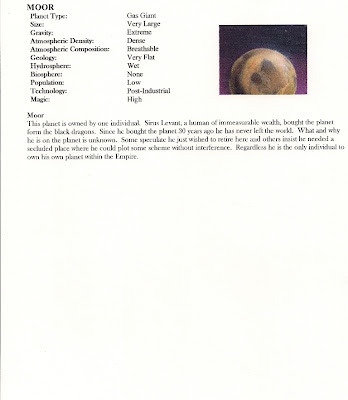 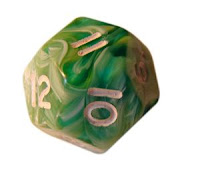 The klagen geist is a truly pitiable creature. Undead creatures exist for a number of reasons; as a curse, as penance for a sin, to fulfill an unfinished duty, as the servants of a necromancer. When an undead is killed the sprit animating it finally is allowed to move on to wherever its final resting place is, for good or ill. The klagen geist is that extremely rare type of undead, one that should have been released on its way but it can not.
The klagen geist is caught between the spirit world and the mortal one. As such, parts of its body have moved on and others have not. At first glance it looks like floating bits of flesh and bone advancing, but upon closer inspection it is revealed that the body form is simply missing large pieces.

As a DM you want your players to be invested in their characters. This means you want them to care what happens to them. One of the best tools to do this is with immersion. Immersion is the blurring of the line between the character and player, but in a good way.  Your players going to school for a week dressed up as their character with the broadsword "in case something happens" is not healthy. Having them forget about the real world for a short bit while they sit around the table is healthy.

Creating immersion takes some work. You also have to be creative; think outside the box. This post will show of the techniques and tricks I've used on my players in the past. Maybe they can give you some ideas for your own campaign. 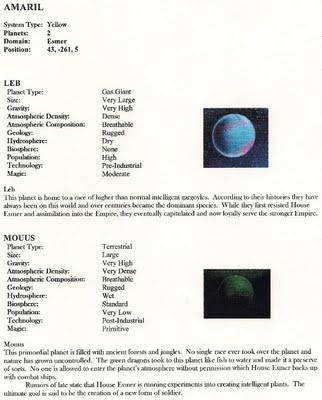 A few years ago I created my opus. It was a detailed Science Fiction Universe. It had 88 systems with multiple planets in them, nearly 300 planets. I used the Dragonstar setting from Fantasy Flight Games. This was a D20 setting wherein dragons, through their superior strengths and intelligence gained control of a star-spanning empire. The usual fantasy tropes were included; magic, elves, etc but it was a science fiction setting with lasers, spaceships and power armor suits. In all is was a very interesting setting. 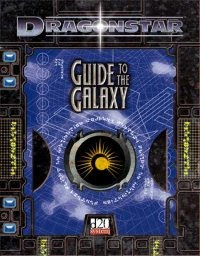 My creation was to be a sandbox setting, wherein the players could go anywhere they wanted. I had star maps, databases of information and other information overload for the plaeyrs to deal with. I was going to run a Blake's 7 style setting of renegades against the system, but I could never find the right set of players to go along with my plan.

The first attempt to run the game died when one of the plaeyers refused to admit that the enemy had overwhelming force (which I blantantly showed them) and proceeded to get the entire party killed.  The second run died when I tried to use the Shadowrun system within the system and it just didn't work. 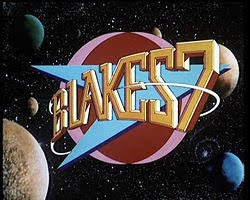 However, for your perusal, I am going to scan the printouts of the systems and post them here; one system per week. Keep in mind that the information is geared to a fantasy/sci-fi fusion, but the data can be used in a purely science fiction setting as well. Alot of the notes and descriptions are geared for the Dragonstar setting, but again if all you want are a bunch of systems and planets for background, then this should help you out. In addition, the pages were meant for the players to look at, so the DM notes are missing.

What to do when a character dies?
When I run a campaign I tend to have an overarching plotline in place, one the characters have had since the start. In my current campaign the character all started as pre-level children. From there we covered their childhood from ages 12 to adulthood (16 in my world). Throughout that time I built the foundations of the plot, giving them hints here and there. I presented them with enemies they could hate and a world shaking plan they feel they need to stop. The characters (and by extension the players) have alot invested in the plot.
So, what happens when one of them dies?
What happens to their involvement in the plot?

The Children- Well of Demons 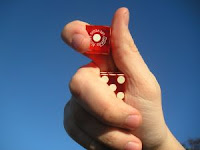 Last night was simply awful and the sad part is that it was mostly my fault.
The characters have begun to explore the Well of Demons, part of a published adventure from WotC, Thunderspire Labyrinth. The module is split into 3 parts and I have coopted the second and third parts. Originally they were set underground inside a vast city, but I am taking the two parts and making them two seperate locations, mostly above ground. Clues led the players to learn the location of the Well and since they are half demon themselves they decided to check it out, especially since there are some innocents from a local town about to be sacrificed there.

This is the first in a series of posts detailing things that happen during the game I am currently running. I am, however, not about doing a story time where everyone is subjected to my prose or where I get to spout about how awesome the campaign is. Instead the posts will deal with rpg elements, how some things worked and how things did not work. It is a practical look at the mechanics of an rpg game in progress.
All too often it is easy to philosophise about rpg gaming, but without object examples, it is nothing but theory. By showing examples, as they had just happened the night before at a real table with real people, it takes rpg philosophy away from the theoretical to the practical.

The current campaign is called The Children. The characters started out as 11 year olds and progressed from there. Unbeknowst to them at the start, they are also the children of demons. This fact is something they have come to suspect by now and is an ongoing theme.

The Rules of the Campaign post I made earlier has the actual email I sent out to my players before the game started. This is the second time I have run this campaign. The first run ended prematurely, but that option is built into the campaign, and the first group "chose" to end it early. Since then my wife has repeatedly ask me if I could run the campaign again. With the release of 4E (the earlier game was run in the Rolemaster system) I finally decided to dust off my notes.

One of the highlights of the campaign is how the characters are coming to terms with the fact they are essentially demons. Major themes to be seen within the campaign are the sense of alienation and contending with a dark, naturally evil side.  The concept of nature vs nuture is prevalent throughout the interactions the characters have had in the past and will continue to have.

The campaign has been running for some time now, but rather than rehash stuff that happened months ago, I will be picking up the ongoings in the current time frame. We play every other week so updates on this will be sporadic and only if something of note happened; ie an interesting topic about rpgs came up in some manner during the evening, but as every game session is a learning experience I should have something from most nights.

The she’tar are a race of humanoid insects. They have average intelligence, but to a normal human they often appear slow witted. They seldom talk. They often act without first talking amongst themselves; it seems as if they know what the others are thinking. This is not from some sort of hive mind, but rather because they are trained to know their place in their society from birth. Every action and task is accounted for. For example, the second one into a room always goes to the left and the third one always goes to the right. This level of pre-determined actions can be found in almost everything they do.
When they have a task to accomplish they do so with a resolve that can lead them to their death, as nothing is allowed to stop their attempt to complete their assigned goal.

Parts 1 and 2 provided some riddles for you to use at your whim. However, its likely they won't be enough or appropriate for your own campaign. If that's the case how can you get more riddles to use?
The easiest option is to do an online search for Riddles. It will take some time to sort through riddles that worl and those that do not. Just be careful that the riddles chosen will work in your world.
Q) What goes around the world but stays in a corner?
A) A stamp.
While this is a good riddle, most fantasy worlds don't have a postal system. You need to always remember the common ground you have established with your players. They can't be expected to think of that answer since they know your world does not have a postal system and even if they think of the correct answer they will discard it immediately.

Here are some general riddles. I have no specific ways to use the answers, but these can still be used during an adventure. The answers may need to spoken aloud to open a door, or reveal something hidden within a room or to unlock a chest.

Riddles have been a part of the fantasy genre for years now; especially RPGs. DMs enjoy confounding the players with a clever riddle. A new GM may be at a loss of how to add a riddle to an encounter, but it is rather easy. Other GMs may not be able to think of a new and interesting riddle (fish and teeth have been taken by Gollum for years now).

Herein I present a couple dozen riddles that can be used. I also give some ideas of how they can be used to make the riddle more fulfilling and interesting beyond the riddle itself.