JRR Tolkien, The Retcon and Your Campaign

As I was watching the Hobbit movie this past weekend, I realized how much of a retcon J R R Tolkien did in the Lord of the Rings vs the Hobbit. Retcons (retroactive continuity) have been a staple of comic books for years. Essentially they take the history of a character and change it. They do this by keeping much of the established history but use that history as a spring board to reveal new bits of that character's history that alter facts and assumptions. One of the most famous retcons was Sherlock Holmes and his "death" at Reichenbach Falls and the subsequent reveal that it was all faked. 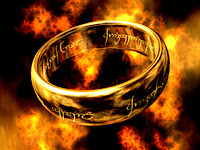 When Bilbo initially finds the One Ring, it was not the One Ring. It was just a ring of invisibility that was used as a plot device to move Bilbo out of his danger with Gollum and for later in the book so Bilbo could actually do his his job as burglar. Maybe Tolkien had some ideas of using the ring as more than a simple magic ring, but that did not show up during the Hobbit. Instead, the importance of the One Ring was revealed in the next book by way of retcon. When Gandalf casts the ring into the fireplace and the eleven script is revealed, that was a retcon. Suddenly the ring was more than a magic ring and transformed by plot into the One Ring.

And you can do this sort of retcon with our own campaign. If your players have moved off your plotline, you can use a retcon to move them back. If you want to introduce a completely new plotline, a retcon can be used as well. Here are a couple of ideas...

-The object. The players have something in their possession that is more than it seems. They have an object that is an artifact or other plot device to move the players into a certain direction. This object could be something as simple as an innocuous item, such as a belt buckle, or something waiting to be important, such as a plain sword. Such items can be revealed to be more than what they seem to be. Much the same way the ring of invisibility became the One Ring.

-The person. A person's background can change as well. A character may have been adopted (or found on a doorstep) and never been told the truth by their "parents". They could have had a "curse" placed on them as a child, which no one ever spoke of. Thus they could have any lineage your plot needs to move forward; they could be a lost prince, the scion of a line of seers that can see the hidden parts of your plot or have the unique ability of wielding a needed artifact. While Tolkien doubtlessly knew Aragorn was the King, no one else did. Aragorn's lineage was revealed much later in the books, something a DM can do later in their own campaign.

The next thing to consider is how the players find out about this retcon. While a DM could simply state the retcon as new fact, it is best to reveal this during play in a manner that makes sense. Often this means dealing with a rare or unique situation that causes the new fact to be revealed. Here are a few of ideas...

-Reactant. The object reacts to a catalyst such as being placed in fire, brought near another object or person. This would have to be something the object has not come in contact with thus far in the campaign. The object, or person, could begin to glow, make a noise, sparkle or anything noticeable.

-Chain Reactant/Reaction. Maybe the object/person causes a reaction, but not until it has come in contact with a reactant. For example, a sword begins to glow when it around orcs, but not until after it has been bathed in flame. This method can be used if you want the object to react to something that is fairly common but that the party has already had contact with.

Of course, one question to ask is, why even bother with a retcon? Why not simply have the characters find the special plot device in the treasure pile of the next monsters the party kills? After all, Frodo could have found the One Necklace in the back corner of a closet. The quest then becomes one about destroying the One Necklace before Sauron can get it back and rule Middle-Earth forevermore. And yet...it is so much cooler that Frodo got the One Ring from Bilbo and an earlier adventure. It builds continuity, even if there was none before. After all, a retcon is the rewriting of history to allow for believable continuity. Players will think their past actions have consequence and meaning for what is happening currently in the campaign and what will happen in the future. Players like that level of empowerment.

We can learn from JRR Tolkien and his retcon.
Posted by Unknown at Tuesday, December 18, 2012 2 comments:

Transitions in a Campaign

As an example of this there is time, specifically how it affects food. At level 1, food is an issue PCs need to be aware of; food is usually kept track of very carefully. It is a tension mechanic; will the characters have enough food to be able to continue? This is because at level 1, the characters' main resource is time. After a battle the PCs use their resource of time to heal up. They also use time to regain other tools such as spells.Without the expenditure of time the PCs are ineffective. Food plays into that time constraint. It is a visible consequence of spending that resource of time. The longer the party rests, the more food is used.

However, as PCs gain levels and more resources, the resource of time becomes supplanted by those other resources. Spells, potions, and magic items replace the need to spend time to recover after a fight. PCs have more spells to cast in a given encounter and thus by sheer volume will be able to continue to the next encounter without being depleted of spells; the need to rest does not occur as often. The need to rest to recover hit points becomes negated by potions and magic items (the ever popular wand of cure light wounds) or just by dint of having a much larger hit point pool. Time no longer is resource in as high a demand and thus other considerations, such as food, become trivial.

And that is where a transition comes into play. The PCs should no longer need to keep tracking food. If a DM continues to require the minutia of food tracking at high levels, it has turned from a tension mechanic to a mechanical annoyance. The tracking of food will quickly becomes tedious at these levels and that feeling of the tedious will begin to pervade other aspects of the campaign keeping it mired in the past instead of allowing it to change into something better.

Instead of making the players keep track of how many rations they are carrying, simply require a a weekly or monthly food expenditure...or go the extreme route and simply state that meal purchases come out of loose change the characters carry; after all, at higher levels characters have access to thousands and thousands of gold and requiring them to spend their gold in such miniscule amounts becomes burdensome. Instead of requiring Outdoor Survival rolls to find food for the party, the DM can hand-wave the roll and simply state, "Because of your much greater experience in the wild, you easily find enough food for everyone while you travel."

The side benefit of allowing for this sort of transition is that the players now have a visible sign of progression. Where before eking out food while traveling was a challenge in itself, now the players can see how they have tamed that aspect of the game. The feeling of epicness begins to enter their sphere of play...and that is a good thing.