The concept of power levels for NPCs has gone through a series of changes over time. In particular I am talking about static NPCs; guardsmen, merchants, beggars, townsfolk, mayors. The sort of every day people that are constants in any setting. Player characters rarely interact with these sorts of NPCs in a truly adversarial way, but it can happen on occasion, especially if the party is of an evil bent or does a lot of social interaction.
I am not talking about the monsters and villains the characters will be fighting, though some of my points could apply to them as well.

Back in the day the level of an NPC was static. The level was determined by the location of where they were from and what seemed most appropriate. Guardsmen in a city were a higher level than those for a village. It made more sense that way, as a city had a higher number of available guardsmen so logically it made sense those of a higher level would be made guardsmen. In addition, guardsmen in a city had to deal with higher level threats and thus could be expected to be of a level high enough to deal with them (excluding the threats only a PC hero could handle). 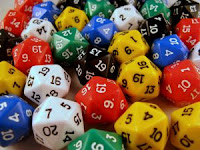 The rotting ghoul is an undead barely held together. At first creation it appears much the same as any other ghoul but as time goes on parts start to rot off. Unfortunately, they have a unique and grotesque way of gaining new body parts. They can rip a missing part off another corpse and attach it to themselves, fusing with the part. They also can restore their health by eating the dead.
The lair of a rotting ghoul band usually contains a number of dead corpses both for feeding when hunting is poor but also to heal themselves if their lair is ever invaded.

It's Not the Game System 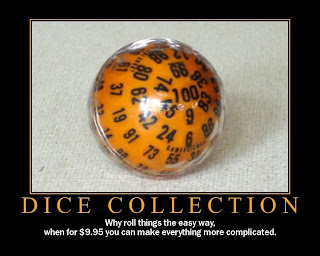 There are a multitude of rpg systems out there. Want to play a game where you can crunch the numbers to make yourself powerful, try the Shadowrun rules. Want an "old-school" fantasy game, try the Mazes and Monsters system. Want a game that blurs the line between GM and player, try the Mouseguard system. There are a plethora of game systems out there that target a wide variety of styles.

However, the thing to remember is that a game system is only a tool to helping a group accomplish what they want out of a game session. Whether or not a group has fun on any particular gaming night is not dictated by the system. 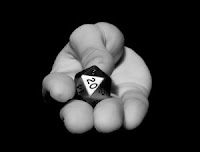 The genre of fantasy (and RPG games in general) is full of clichés. Clichés can be like comfort food, something we all know and like. For people new to rpgs they make things easier and get them in the mood. However, they can be, and often are, overused. They become tired and unexciting by virtue of having seen them before. Eventually there has to be a shift away from using the stereotypical encounter.
However, I say there are many times we still want to use the cliché.

Here are some typical rpg situations most of us have seen before:

Earth Guardians can be summoned by those with the proper rituals to protect an area. To be more specific they are a part of the consciousness of an elemental chaos being. This segment of the consciousness is imbued into a collection of common earth or rock and given just enough sentience to allow the guardian to complete its assigned task. The original chaos being is aware of the theft of a portion of its mind, but they seldom can do anything about it. 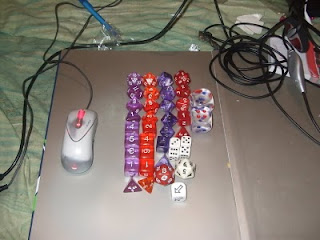 Currently in 4E there are few interactions between powers. There are interrupt actions and reaction actions, but they are used in very specific circumstances. What I have in mind is a basic system for allowing more utilization of powers to interact/interrupt powers in a broader manner.

For example:
If a power allows a character to cause rocks to fly from the ground into the face of an opponent, and another character has a power that allows him to move earth, it makes a certain logical sense that the second character should be able to prevent himself from being hit in the face with a rock.

I fully understand that the powers in 4E are very specific as to what you can do with them and what you can not. I generally do not believe a power should grant abilities beyond what they are meant to provide. A fire attack does not always cause the target to catch on fire for ongoing damage. There are other powers that a player can choose to do that. However, sometimes it just makes sense from a thematic viewpoint for something to work differently.

The concept of this article is that you can use a power to negate another power, if they can interact with each other. This can be done to cause a power to fail as it is being used (during the attack roll) or to remove an ongoing effect.

I would place restrictions on this method. To keep things balanced and fair a character would have to give up resources to negate the power of an opponent. Allowing an at-will power to negate a daily power is unbalanced.

What do you think? Too liberating of 4E powers? Too hard to manage? Too easy to abuse?

Posted by Unknown at Wednesday, January 13, 2010 No comments: 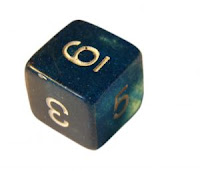 Years ago, a once mighty empire was in decline. Rulership was decadent and distracted from leading their kingdom. They had left the “trivial” tasks to province Governors, Governors who took advantage of the lax control to better themselves over the concerns of the empire.

Petty rebellions of subjugated lands began to spread. Incursions of evil humanoids began to penetrate the exterior of the empire. It was becoming harder and harder to maintain control. The General of the Armies, General Delin O’Mere, was beset on all sides. For some time he was able to maintain the status quo but as time kept moving forward he began to lose more troops and there was little to replenish his forces. The Battle of Shale Hill was a turning point. Despite winning the battle and stopping the invasion of the Horse Armies, the elite guard was decimated. The empire’s foremost fighting force was gutted.

General Delin sought for a way to augment his armies. If he could not do this through conscription, he knew he had to find another way. He eventually went to the Autumn League, the premiere guild of mages. He had to allow them greater concessions within the empire (some say this had a hand in the Red Cataclysm) but they gave him what he asked for. One of the greatest creations was the Relentless Armor.

He was able to equip an entire division with the armor. Even when the soldier was killed the armor would keep going. It proved its worth upon the battle field many times, but the empire did eventually fall. Suits of the armor can still be found in old ruins on occasion and are prized for their obvious value.

Posted by Unknown at Thursday, January 07, 2010 No comments:

For some time now, one of the complaints of 4E D&D has been the stratifying of character actions, the notion that character actions are now limited by powers. While I can see some worth in such statements I mostly let them slide as being over-reactionary.

Lets take the Prone condition as an example. There are multiple powers that allow a character to knock someone prone. The pundits feel everyone should be allowed to knock an opponent prone with a simple, modified attack roll. However, by allowing everyone to do it, it lessens the impact of the action. By limiting who can do such an action it gives it more meaning and importance. Knocking an opponent prone provides a benefit to the combat, one which allows the person who can do such as action an opportunity to shine, to grab the spotlight and feel important for the moment.

All too often when a player attempts an action that has a side effect, such as knocking an opponent prone, they are attempting to gain a bonus to a regular effect. Essentailly they are trying to "cheat" the system and get something for free. While it is true they are willing to take a penalty while gaining their added bonus, trust me, the player has already calculated that the odds are still in his favor and that he is suffering a non-significant penalty. 4E has provided a system wherein a player can have his character gain benefits to his standard actions and has balanced them within the system.

Some of the WotC design staff have mentioned they feel the 4E system is still open and allows players to have their characters take a variety of non exclusive actions. If a character wants to swing off a chandelier onto the enemy then they should be allowed to. I agree with this statement...up to a point.

My ruling has long been that if a power allows a certain effect to take place, such as knocking someone prone, then the effect is precluded from generic actions anyone can do. My rational is that a player has committed resources (he has a limited number of powers he can choose) and his choices should be important. If a player chooses a power that allows him to cause a certain effect, such as knocking someone prone or blinding them, it would be a disservice to allow someone without a power to do the same effect just by taking a penalty to the attack roll. Why pick a power with a special effect if anyone can do it?

Yesterday, WotC released a new DnDInsider article for rangers that provides some new power selections. The article was really good and added alot of choices to the ranger class. One of the abilities was one wherein the ranger can shoot some arrows into a wall and use them to assist in climbing the wall; essentailly making a stairway of arrows. Cool concept. Such an idea would be cool if a player thought of it and used it. However, if I have a player playing a ranger in my group who chooses this power and then I turn around and allow anyone else with a bow and arrows to do the same thing, I would be doing a disservice to the player who had his character expend a level to pick this ability.

That is why I disallow actions that cause effects that powers cause; to allow a character's abilities to be at the forefront and make a players choices be relevant and meaningful. However, everytime WotC releases a new power there is one less improvisational effect a player can do without stepping on the toes of another player. And that is where my disconnect comes in. On one hand a character should be able to do anything that is exciting and fun and on the other hand is the player who expended limited resources to be able to do the same thing.

I still enjoy 4E very much, but I think there has been a fundamental change that we seeing more and more of as more material is released. It will not change the fun and enjoyment I am having with 4E, but it will change the ties it once held to earlier editons.

For now, I am going to stick to my policy of allowing a character to do any action that is not covered by a class power, but I fear as time goes on the number of these actions will become less and less.
Posted by Unknown at Tuesday, January 05, 2010 No comments: