When we think of 3D in an RPG game we automatically think of miniatures. They take a tactical encounter and bring in a tangible aspect. We can see where the characters are, how they interact with each other and the terrain. They take an encounter away from something in your mind to something you can see and touch.

I think we can take it further. A true 3D experience adds a third dimension, up and down.

Readily accessible are well made 3D chess boards. Basically, they are usually 3 chess boards built to stand over each other. There are variations on this that add more boards, but the standard is 3. By using such a set of boards we can simulate height.  Simulating height has always been difficult, but 3D chess boards can do this easily. Adding a second set of boards can expand the playing area over a wider area. 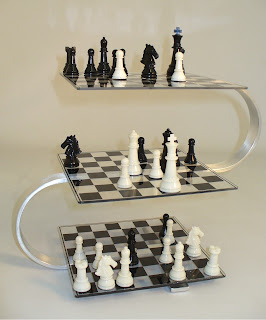 This can be used in any encounters wherein the characters are flying or swimming. Just add a rule where moving or attacking from one board to another adds a range of 10'.


This setup can also be used in unique encounters wherein the terrain has special teleportation circles that moves them from board to board. The encounter becomes one of tactical teleporting as the characters try to outmanuever the monsters.

Another option is to prepare an entire setting such as a tower or dungeon wing. You can lay out the entire dungeon ahead of time. While the players will be able to see the props in place ahead of time, it will save the DM alot of time. Instead of drawing rooms and erasing them, or slowing down narration as he places the next rooms props, it can be done ahead of time. Seeing what rooms are coming up can also build anticipation with the players.
If you try any of this out, let me know how it went.

Posted by Unknown at Tuesday, February 23, 2010 No comments: 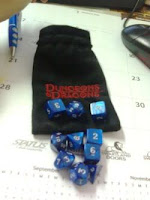 As the waning days of a former mighty empire came to a close, General Delin O’Mere sought for ways to stop the decline. He went to the Autumn League, a premiere guild of mages, and gave concessions for their aid in designing ways to augment his forces. One of the most powerful additions he had created were the caedes. They were specially bred to be genetic weapons of destruction.
Caedes look vaugely humanoid. They have long, slender limbs that end in long needle-like talons. Their head is elongated into a snout and they have a single bulbous, mulit-facted eye in the center of their forehead. Their skin is leathery and runs from a soft brown to deep green. They move exceptionally fast and seem to jerk as they move from a postion of complete rigidity to a sudden burst of speed. Their movements are designed for the highest efficiency; they move just enough to complete their function, and their function is to kill.
Caedes were bred to kill indiscriminately. Once let loose from their "kennels" they could not be controlled until they had killed something. There are tales of them killing their own forces if their bloodlust could not be assuaged fast enough.

I love my GM screen. I can hide all sorts of things from the players; my rolls, the adventure with its maps, my notes, monster hp levels. Keeping the players guessing is something I always like to do. My GM screen also holds all types of useful charts, a couple of my favorites being the one which assigns target numbers based on the character’s levels and the difficulty of the situation (for those impromptu rolls), and the one that lists options during a round and whether they are standard, movement or minor actions (opening a door is a minor action).

And that is one of the main reasons to have a screen; to provide the GM with the information he tends to forget during play. However, there is something missing from every GM screen ever created.

What about the non-charts? What about the art of being a GM? I know when I am in the middle of running a game I get caught up in the charts, what the monsters are doing and die rolling. All too often I forget the other stuff, like saying “yes” instead of forcing the players onto a railroad. After a game I kick myself wishing I had done something differently.

For this reason I have taken to paper-clipping some GMing tips onto the inside of my GM screen. I cover up something I know I don’t need to look at during the night, such as the experience point chart for when the players level up; the players are sure to keep up on that so I do not have to. Some tips include…
“Say Yes”
“Use voices for the NPCs”
“Be descriptive-Smell, Sound, Sight, Touch”

What tips would you put on your GM screen if you could?

Posted by Unknown at Wednesday, February 17, 2010 No comments:

It is my supposition that players are builders. Within an RPG campaign they prefer to build things over destroying things. I know this sounds contrary to characters running through a dungeon, killing everything in sight and ripping the place apart looking for treasure.

But what is their real motivation? Is it to kill stuff? Maybe for some players. I would argue, for the majority of players, the leveling up process and gaining of gear to make themselves more effective is what the players are really trying to accomplish. 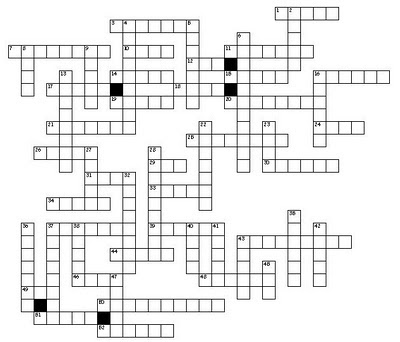 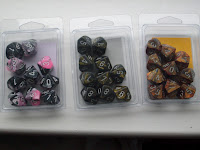 A trap GMs and players make when playing 4E D&D is assuming that if the rule book lists a rule or system that this is the only way of doing things. I am not saying to change things with house rules, but rather, to not confine the way things are done just because alternates are not specifically mentioned in the rule system.

A couple of stumbling blocks come with building encounters and skill challenges.