RPGaDAY #31 - Predictions for the next year

What do you anticipate most for gaming in 2018?


I'm going to preface this post by saying that I am a cynic (and by extension a pessimist). Here are some predictions for the coming year...

-Brick & mortar stores will either close or stop carrying rpg games. I have seen many "hobby" stores relegate rpg games to 1-2 shelves only. They also only carry the latest and most popular games and only a couple of them. The days of being able to walk into a store and seeing every product for a game, the latest releases and older games/supplements (stuff released within the past 5 years) are gone or dying. Most brick & mortar re being kept afloat by collectible card games or board games (and I have seen a decrease in board games of late).
-5E will remain strong. People still seem eager to explore the system. However, WotC will need to provide rules updates (instead of just adventure paths) which they are planning on doing later this year. This puts them in an excellent place.
-Kickstarters will diminish. Most companies have turned to Kickstarter as their main avenue of selling games and I believe there is a Kickstarter fatigue going on that will increase.
-Slow decline in rpg sales in general. While I think the market is still strong, I have heard of various companies selling less overall. I feel that rpgs were a growing fad due to Harry Potter/Lord of the Rings/Game of Thrones but as a fad they are waning. The market will continue strong but not at the same heights.
-New Games will continue to proliferate. More new games with old and new systems will be released but most will be niche games too often overlooked. Of late we've seen a bunch of new editions for older games and genres (Torg, Star Trek, etc) but I suspect we'll see some solid games that are new and fresh.

What is a genre-mashup you would most like to see?


To start I'm going to list some of my favorite mash-ups currently out there and then I'll get to the one I'd like to see that is not out there yet. There are quite a few that I like and think work really well...

-Torg. This game does an excellent job of integrating genres in a coherent way. You can add almost any type of genre without upsetting the game.
-Shadowrun. Cyberpunk and Fantasy. Superb game that I have run many times.
-Mutant City Blues. Superheroes and Investigation (Detective). Two of my favorites.
-Ashen Stars. Science-Fiction and Investigation (Detective). Another Gumshoe game that works very well as a setting (even if I am not a fan of the system).
-Deadlands. Wild West, Fantasy, and Horror. I ran some excellent and long running games with this system.
-Dragonstar. Fantasy and Science-Fiction. I love this setting.
-Vampire (White Wolf). Horror and Modern. I've run many a game using this system and they've all been enjoyable.
-Fading Suns. Science-Fiction and Fantasy. I ran this game and it was fun. Too bad it got lost in the rpg landscape.
-7th Sea. Three Musketeers and Fantasy. Played the heck out this game. I loved the first edition (still do); haven't tried the newest version but I am leery of the rule system.

Now for my favorite mashup I'd like to see. My gut reaction is to say superheroes and something else, but the more I think about it the more I realize that combining superheroes with something else is difficult. It is not impossible as I've seen some Superhero/Horror (Rotted Capes) games but superheroes tend to dominate the setting due to their level of power. While Torg technically includes superheroes they are limited to the level of pulp powers and weak which allows for their integration.

Lately I've been on a time-travel kick and I've always liked fantasy so...

Time-Travel and Fantasy. The setting would still be Earth but a slightly futuristic Earth where magic has returned (sort of the way it did in Shadowrun but without the goblinization). The theory is that magic has always existed but in small amounts in recorded history. The PCs are part of  team that travels back to historical Earth to keep control of rampant magic, especially when it disrupts the time-stream.
An adventure would be something like...Jack the Ripper was a diabolist and the killings were part of a ritual to summon a demon. The PCs must stop him before the ritual is completed.
Hmmm...maybe I'll have to start working on this.

What has been the best-run RPG Kickstarter you have backed?


Tough call. I have backed quite a few kickstarters and most have come out beautifully. Picking one will be hard. Here are some of the better ones...

-Feng Shui 2. Fast turn around. Good product.
-Primeval Thule 5E. Fast return even on the stretch goals. Looked great.
-Starvation Cheap. This is for a smaller kickstarter and book but its the only one by Kevin Crawford I've backed. I had to include this one because the man is a beast when it comes to kickstarters. He runs awesome kickstarters that go smooth and fulfill fast. For me his are the standard for rpgs.
-7th Sea 2E. Well done. So far mostly on target for releases. Nice product in hand.
-Quests of Doom 5E. Not a lot of updates during the process but the fulfillment was fast and the product was what I expected.
-A Touch of Class 5E. Blindingly fast turnaround. Nice product. They probably didn't need to go the kickstarter route, but that seems to be the way to go these days.
-Torg Eternity. It just ended but I have the preliminary pdf already as well as another 180+ page stretch goal. It is going very well so far.

...but the best one I would have to say is...
-Tome of Beasts 5E. It was fast, including the stretch goals. The book is gorgeous and I got a stretch goal I didn't even know was part of my package. They must of lost money on this one. 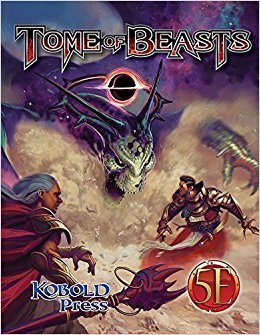 What film/series is the biggest source of quotes in your group?


Monty Python and the Holy Grail.
I suspect this answer will be the most popular one...at least for us older gamers. Even my wife who has never seen the movie (I almost stopped dating her when I heard that) will throw in quotes at the appropriate times. There is usually at least one quote a game night.

However, I am unimpressed by them. They got stale a long time ago for me. Don't get me wrong, I absolutely love the movie, but I've heard the quotes so often they are cliche and almost trite now. People seem to use them as some sort of badge of honor, "Hey, look at me. I have geek cred." or they try to present them as 'new'. The quotes haven't been new for over 40 years. Now I just smile and move on.

I wonder if there are other source of quotes just as big. I know Princess Bride gets a lot of quotes and some nights will surpass the Holy Grail for quotes. Are there other, more modern, film/series that can contend? Am I out of touch...or are the modern fantasy films unquotable?
Posted by Unknown at Monday, August 28, 2017 7 comments:

What are your essential tools for good gaming?


Dice and paper and pencil.
Seems simple doesn't it? That is all I really need, the essentials. I usually have a good idea of the targets numbers required for a game system and from that I can pretty much do anything. For monster stats (for which I usually use the stats as found in a book) I can forgo the book and just run a monster by "feel"; ie the monster dies when the PCs have gotten in a few good hits. I actually do run by the rules and written material but I can improv, even with the stats, when needed.

However, there are a bunch of other things I prefer to have either in game or as I prep. I prefer a DM's screen if only to hide my die rolls. A map of where the PCs are. The combat stats for the antagonists. Written out encounters. My reading glasses so I easily see the writing on the paper. A drink. The rule books within reach.

For prep I tend to get help online. Kobold Fight Club and Donjon help a lot with encounter building. I also have literally hundreds of rpg gaming books which I use as a research library. If I am home-brewing I will look at them to see how someone did something or to get an idea.

So, the essentials are very light but I do prefer to make use of all of my available tools.
Posted by Unknown at Sunday, August 27, 2017 4 comments: