I am in the middle of setting up my new sandbox world. One thing I like to do is add the unusual. Herein I present some unique trees that could be found in a fantasy setting. It should be easy to throw one of these in at any point without disrupting a campaign.

I would recommend keeping these trees rare. This will keep them unique and their rarity can be a catalyst for adventures. I have included some plot hooks to help make use of them; however, it is easy to ignore the plot hooks and simply have the characters stumble across one of these trees in the wild. 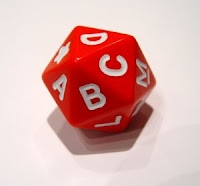 The D&D Insider is simply awesome for running a 4E game. The Character Builder makes creating a character a snap. Supplemental information is within easy reach; no more searching through five books looking for a specific power. The Monster Builder makes creating encounters super easy. The Dragon and Dungeon magazines have a lot of useful things within them (right now I am plundering Dungeon adventures for my new 4E sandbox campaign that is starting this week).

The Character and Monster Builder are updated monthly (though the Monster Builder seems to missing a few updates). A subscriber is allowed 5 updates during a month; this number resets back to 5 at the beginning of the next month. This is where a possible question of ethics comes in.

If a GM has the D&D Insider subscription, is he allowed to share his log-in information with his players, thus allowing them access to the benefits of his subscription?

At first glance the answer is no, he is not allowed to share his subscription. He is a single individual and thus is the only person allowed to use the benefits of the subscription. You can probably stretch this to allow the players to create and update their characters on the GM’s computer.
Relating this to music CDs, this would be similar to letting a guest put the latest Snow Patrol music CD into the CD player and hitting play. The questionable part comes in when you allow the guest to burn a copy of the music CD and then let him take it home with him to be played at his leisure. It’s the issue of a single commodity (and single purchase) potentially being used at the same time in separate locations.

This leads to a question involving intent. Is it ok to let your players use the GM’s subscription to D&D Insider if all they are going to do is update their characters that will be used in the GM’s game? The intent is to remove the chores of character advancement and allow for more gameplay time at the table.

Is a D&D Insider subscription a group purchase or an individual purchase?

How have you and your group handled these questions?

I am starting a new 4E campaign and will be building a fresh world from scratch. These Farstead posts will be about the process of building that world. Its intent is to show a practical form of world-building as it happens. When all done (over many articles) I am hoping people can gain some more insight into the development of a world and there will be a ready made world setting to be used for those so inclined.

The first thing to consider when building a world is the overall concept. This is not about what makes the world different from all the others out there, but rather what the goal of the world design is. This hinges on the concept of the campaign itself. A world is meant to push the campaign concept. How will the world being designed facilitate the campaign that is going to be run there?

In my current 4E sandbox I determined the players needed some way to gauge the strength of potential opponents before they actually engage them. In a sandbox the encounters are not placed with the level of the characters in mind so it is easy to be outmatched quickly if the players are not careful.
I decided on Insight because this is more than a simple Perception; it is more about coming to a conclusion after observation. The character watches an opponent, sees how they carry themselves; how self-confident they are, how they handle their weapons, how alert and on guard they seem.
This use of the skill is used when there is a chance for conflict in a standard encounter format. It is not meant to determine if a village of 100 orcs will be dangerous (they will be). This is more for determining if the party can handle the orc guards at the gate of the village or one of the patrols around the village.

Threat Assessment
Make an Insight roll to determine how dangerous a group of potential opponents could be. 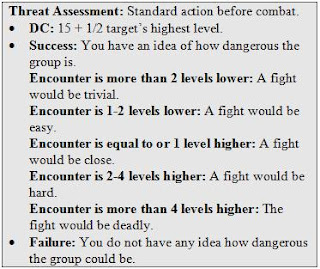 Characters protect mighty nations from malevolent threats, have their bodies possessed by evil creatures, are beset by viral plagues and a wide variety of exotic and exciting challenges. Their deeds are legendary and certainly out of the ordinary. However, in order to keep it all in perspective you need to include the mundane, the unexciting.

If all characters do is the impossible then the impossible becomes the norm. By including the normal it serves to highlight the exceptional. At first glance this appears to be counter-intuitive to the general backing philosophy of the RPG genre; to be something we are not during our everyday life. The trick is to not spend a lot of time on the mundane. It is better to use such things as a narrative device.