Here is a puzzle you can throw at the players...

The players come across a door that will not open or a force field that protects an item they want and can not be dispelled. Lying on the ground before the barrier are a set of playing cards and some writing on a plaque:

The barrier will drop when the correct word/phrase is spoken out loud.

Click to find the answer and variations on this puzzle. 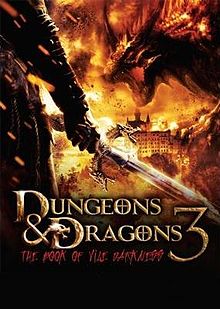 The Harry Potter and Lord of the Rings movies have made the fantasy genre cool. The characters are believable yet bigger than life. They pull off exciting things the viewer wishes they could do themselves. They make the viewer want to be a part of what is happening up on the screen. D&D and RPGs can thus reap the residual reward from potential customers looking to experience those movies for themselves. Those movies can bring new customers and a new generation of gamers to RPGs.

And then we have the actual D&D movies. This is how you kill any momentum the better movies have created. A non-gamer seeing the D&D movies will think D&D is cheesy and lame. Why would they want to become part of this world called D&D? To them it would appear as if it’s cheap and goofy, not cool and exciting; something to be avoided, not embraced.

WotC is actually doing a disservice to the D&D brand, and RPG games in general, with these movies. They are doing more harm than good. They can actually drive people away from D&D, and that is the last thing they should allow. I know they have no control over the movies, or at least limited control, but it would actually be in their best interests to make sure this upcoming movie does NOT happen.

The best we can hope for is that they never get a wide release and no one ever sees them…and that is a sad statement.

What is the single biggest thing to enable the OSR to succeed and continue to succeed?

Is it a core philosophy of streamlined mechanics?
Is it a retro feel that hits the heartstrings of our youth?
Is it designers that bring insight, enthusiasm and creativity?
Is it that it is different from the other rpgs out there?

No, none of those things.

What is the single biggest thing that will allow 5E to grow and find its foothold in gaming consciousness and tables?

Is it a fusion of game styles that pleases everyone?
Is it modularity that allows gamers to craft their own version of D&D?
Is it designers that bring experience, insight and creativity?
Is it slick, glossy products that raise the bar?

No, none of those things.

The single biggest thing that allowed for the growth of the OSR movement and will allow for the growth of 5E is the OGL.This is not simply because it gave a legal opportunity to the OSR designers, but rather because it allowed then to join together. Even with divergent designs between the various retro-clones there is still a core system of mechanics that bind them all together. The OGL allowed the curious to understand what was going happening and to join in...and it is that ability to join in that gave the OSR it's life.

If the OSR was just a single entity producing product the OSR would have died long before it grew to where it is now. It is the fact that multiple people can join in on the design and production that allows it to grow. Even if a person never releases a new retro-clone and just puts out a small bit of free material they feel ties to the OSR movement. The OGL allows people to become a part of what is happening.

And that is what 5E will NEED to find its own feet and its own growth. If it is just WotC dictating the game from on high it will never reach its true potential. Already people are producing adventures, backgrounds and other material for 5E and it is still just a playtest. People want to be a part of 5E...will WotC let them?

Why Tabletop RPGs Will Not Die

Some people have been talking about the decline of tabletop RPGs for years now. They say Magic the Gathering and CCGs have eaten dramatically into the market to the point where it will never recover. They say gamers can get the same thing with MMOs and other video games, but without the hassles of the tabletop. They say the interest in tabletop RPGs has reached its peak and is now a has-been form of entertainment.
I say ‘No’ to all of that. This is not wishful thinking on my part, wherein my love for this form of entertainment is blinding me to the realities of the industry, but rather an understanding of what tabletop RPGs bring to entertainment and the way we live as humans.

The reason why tabletop RPGs will never die is that – At its core, RPGs fulfill fundamental needs that no other medium can.

People need human social interaction. There have been numerous studies on the subject of human contact and the end analysis is that human interaction is one of the most important things to living a healthy life, on par with the physical needs of food and shelter. And at each person’s core, at an instinctive level, is a drive to fulfill this need. Some examples of the importance of human contact can be found here, here, here and here.

While the need for human contact is universal, there is a secondary need that RPGs fulfill and that is the need to take in and express imagination, to keep the mind active. The reason fantasy is such a draw is that it provides the greatest form of imagination, brings us furthest into our imaginations. D&D, and RPGs in general, tap into that need for imagination. And they do a superior job fulfilling this need.

Magic the Gathering, and others of the “tabletop destroying” CCG genre, is a static game. It has some elements of human contact and some elements of imagination, but it is not as all-encompassing as an rpg. The human contact is adversarial, which is not as powerful as an rpg wherein working together brings the players together and reinforces the social interaction. The immersion into the imagination is not remotely as deep.

MMOs and video games are excellent at tapping into that need for imagination and they create the illusion of human contact. This is done through interaction with digital human constructs and even with fellow players, but again, this level of human contact is not remotely as in depth as at a tabletop game. The subtle messages a human sends with body language and speech tone are lost over a computer line. The best times in an MMO is when a player is interacting and working with another player and they are working well together. Better times are when they can share voices over a voice chat channel wherein they actually hear the other person and the inflections therein.
In addition, the imagination of a tabletop game is substantially more intensive than that within a video game. The ability to have the game react to the player helps to create a greater immersion and attachment to the form of imagination.
Video games are a good substitute for human contact and imagination, but tabletop simply does it better.

RPGs have not reached their peak. As with all things, it goes in cycles. People may enjoy something, but human nature means looking for something new and fresh. People forget the joys and strengths of tabletop games. But there is a primal draw to tabletop rpgs that brings people into this form of entertainment. The only reason our favorite form of entertainment is not as prevalent is a lack of exposure (and some misconceptions as to what it can provide). While I firmly believe that rpgs can fulfill fundamental needs of us humans, it does no good if no one knows it exists or that it can provide what is needed.
While this is no statistical evidence, I see people much younger than my older self playing and enjoying tabletop games with much the same passion as myself. The genre of fantasy as found in media, such as film (Lord of the Rings, Harry Potter, the super-hero genre and science-fiction), is one of the strongest forms of entertainment these days, generating billions of dollars. And tabletop games do it better. While the exposure of actual tabletop rpgs is weak, those individuals that find it are drawn in and stay.

RPGs will not die because nothing fulfills our needs more.