Part of the "new" wave of rpg game systems are ones that incorporate narrative and role-playing aspects. Even 5E has taken some of the concepts and interjected Backgrounds, Inspiration and similar ideas that try to entice the players to role-play. A game like FFG's Star Wars rpgs tie narrative directly into character actions where every "success" and "failure" is dictated by the die roll and has a narrative consequence. For instance, a "success" roll comes with mandatory exposition and narrative consequence. It takes the "yes, you hit, but ..." to a new level where the "but..." is mandatory.

Gamers are made up of all types. Some like the heavy narrative rpgs and styles. They can turn a shopping trip into hours of fun. They can let everyone know the angst of killing a goblin. And then there are players who just want to "I rolled a 21 so I hit and did 8 points of damage." Some groups tend to come together because they have similar play styles ("We only like emo vampire games"), but some are just friends outside of gaming and bring a like for a variety of play styles.

What type of system can best satisfy a wide base of styles? The obvious answer is the one that is most minimalistic, the one that starts basic but still allows for more if that is what is needed/wanted. A system that only requires die rolls with simple interpretations ("I hit for x damage" or "I miss, move on to the next person") is that baseline. Sure a simple system with no required narrative interpretations can be lacking for some players. However, narration can happen in such a system where the player, or DM, simply adds it themselves.

Conversely, a system that requires narration as a result of every die roll requires that players who do not like narrative styles...be narrative. This will be a turn-off for the system for those people.

So, I say, keep a system simple and add in options for narrative interpretations of die rolls - do not make them mandatory.
Posted by Unknown at Tuesday, May 26, 2015 No comments: 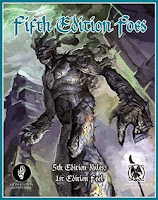 I am really liking the Fifth Edition Foes from Necromancer Games. While writing my own adventures I find myself continually going to it to fill out the monsters for my encounters. However, one of the complaints has been that there is no table listing the monsters by environment. This past weekend I sat down and wrote up an excel spreadsheet listing all the monsters by terrain/environment. Here is a link to the spreadsheet. There are tabs at the bottom that list them by terrain.