Which RPG have you owned the longest but not played?


Bushido by FGU.
I got the game soon after it was released by FGU. It was actually out before then but it didn't come onto my radar until FGU published it. Technically, I had some early Traveller books which came out before Bushido but I actually picked them up after I got Bushido. 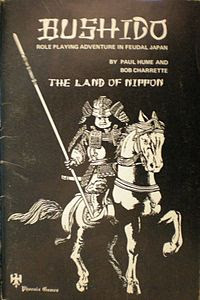 Bushido was a fascinating game for me. I guess I just loved the concepts of samurai, ninja and wujen. I wrote up a couple of adventures and did some maps but never actually got to play. (I posted some of them on this blog and you can find them here). Since then I have played Legends of the Five Rings which I feel is a superior game, even if it isn't a true Japanese setting game. I will likely never play Bushido for that reason but I still have it and its supplements.