Which RPG cover best captures the spirit of the game?


I have seen many different covers through the years, with the majority of them actually doing a good job evoking the game inside. For me this question come down to one of nostalgia. Which cover make me want to play RPGs overall, want to explore what the game offered. While the cover to the Blue Box Basic D&D was good, it was the cover of the AD&D Player's Handbook that really caught my eye and attention. 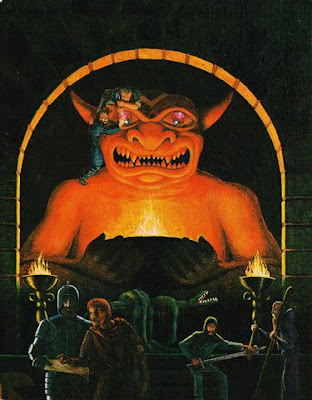 In it you had party all doing their own "class" thing. It showed how you could play anything. You had the warriors who just finished hack-n-slashing, the mage, the fighter type planning the next move and the thieves doing thiefly things. It showed that a lot can happen in the game. Plus, you just know something is going to go wrong as they pry out the gems...the mystery of the idol is evocative and makes me wonder what would happen if my character was there.

The picture also reminds me of all the adventures I did have back in the game with that game. So nostalgia plays a big part in "best evocative cover".